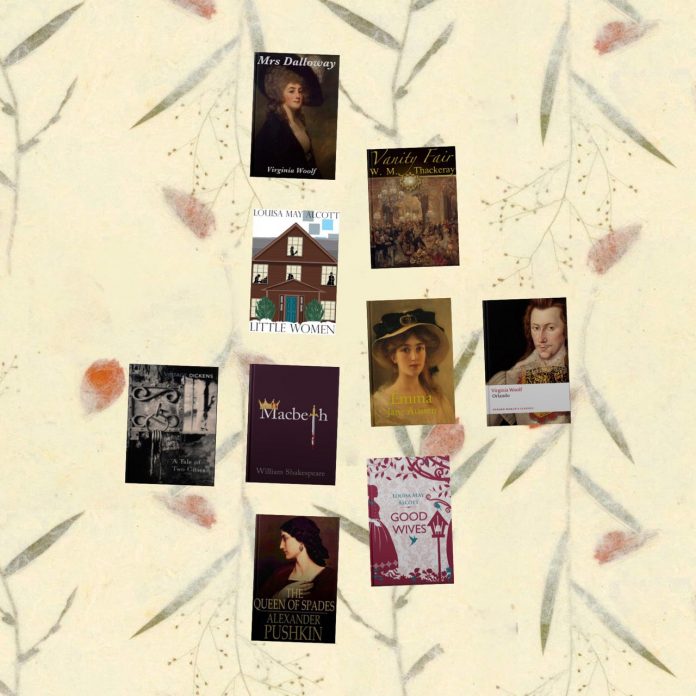 My first list of books, which I will read in the first part of 2020, includes nine novels. These books are real masterpieces and literature classics. During my life, I’ve always read several books. During high school, I developed a passion for literature. Moreover, I also studied Greek, Latin, art, philosophy, and history. Let’s check these nine novels:

The hero of this novel by Jane Austen is Emma, a charming, smart, and rich young girl. She doesn’t enjoy studies, and she categorises people because of their social-economical status. Nevertheless, she loves to match her friends and acquaintances, intending not to marry. Another main character is Mr Knightley, who is a wealthy close friend of Emma. Sometimes he criticises her behaviour, although he is a kindhearted and benevolent person. The other characters of the novel are Mr and Mrs Weston, Emma’s closest family, the wealthy Frank Churchill, the selfish Mr and Mrs Elton, the beautiful Jane Fairfax, the naive Harriet Smith, and Emma’s father, Mr Woodhouse.

A Tale of Two Cities is the most famous historical novel by Charles Dickens, who published it in 1859. This book finds its roots in “The French Revolution: A History” by Thomas Carlyle. Also, Dickens’ analysis during his travels to Paris has a significant impact on the book. The novel consists of three books: Book the First: Recalled to Life, Book the Second: The Golden Thread and Book the Third: The Track of a Storm. This historical novel takes place in London and Paris, during the French Revolution and the Terror. The main characters are the French doctor Alexandre Manette, his compassionate daughter Lucie, the arrogant Sydney Carton, the revolutionary Madame Defarge, the businessman Jarvis Lorry and the French aristocrat Charles Darnay. In this novel, the brightness and obscurity represent the virtue and sin personified by the different characters.

In my list of books that I plan to read in the next months, I couldn’t miss Little Women, a novel by the American author Louisa May Alcott. The plot is about the life of four sisters March, Meg, Jo, Beth, and Amy. They live with their mother Marmee in Massachusetts, New England. They are a low-income family whose father is away because he works as a pastor in the American civil war. Each of them has a different personality. Meg is pretty and classy; Jo is a butch girl, Beth is an introverted pianist, and Amy is a dreamy artist. Although they have different personalities, they love each other. Louisa Alcott found inspiration from her family, and she identified herself with the character of Jo March.

[…]we prefer to honor lots of other web web-sites around the internet, even though they arent linked to us, by linking to them. Beneath are some webpages really worth checking out[…]

This website uses cookies to improve your experience while you navigate through the website. Out of these cookies, the cookies that are categorized as necessary are stored on your browser as they are essential for the working of basic functionalities of the website. We also use third-party cookies that help us analyze and understand how you use this website. These cookies will be stored in your browser only with your consent. You also have the option to opt-out of these cookies. But opting out of some of these cookies may have an effect on your browsing experience.
Necessary Always Enabled
Necessary cookies are absolutely essential for the website to function properly. This category only includes cookies that ensures basic functionalities and security features of the website. These cookies do not store any personal information.
Non-necessary
Any cookies that may not be particularly necessary for the website to function and is used specifically to collect user personal data via analytics, ads, other embedded contents are termed as non-necessary cookies. It is mandatory to procure user consent prior to running these cookies on your website.
SAVE & ACCEPT
wpDiscuz
2
0
Would love your thoughts, please comment.x
()
x
| Reply
MORE STORIES